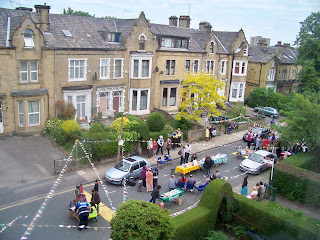 Long before that evil Tory ruined the word 'Big', the Eden Project coined the event 'The Big Lunch'. It is a simple but brilliant idea - streets are encouraged to close down the roads to traffic and the neighbours are invited to eat lunch together.

Today, 'The Big Lunch' came to Ashgrove, the perpetually sunny street where Desmond Tutu House is located. We had been building up to it for months (3 months legal warning to get a road closed!) with lots of litter picks and leaflets to prepare the neighbours. The local Methodists got involved (though the Catholic Church completely failed to engage...) and the council pitched in with its neighbourhood community team.

From 12-4, all traffic was stopped, bunting went up, and tables went out on the streets. Neighbours were a little unsure at first, but the kids pestered them to come out (they could smell the face paint) but 2pm it was a roaring success, the Muslim kids playing football with the Latvian and Polish kids. The Ugandans playing 'superheroes' with my little ones.

If we provided more community space for kids to get to know one another, then the world would some be a better place.

Then the food began to pour in - with East European, African and Asian delicacies way beyond the size of the trestle tables we had borrowed from the YMCA. People living in hostels were mixing with students of electrical engineering. local homeless people came and ate their fill. It was heavenly. 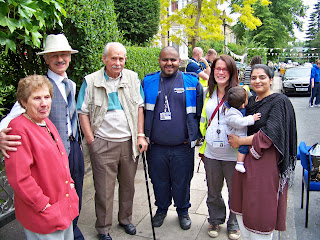 'The Big Society' seems to be based on cutting down on vital resources, ending up with vulnerable people going without. 'The Big Lunch' on the other hand, is about building community from the bottom up, regaining a sense of belonging and neighbourliness. After such a heartwarming day on the street, I pretty much know which one I prefer!
Posted by Chris Howson at 13:34