'Elysium' - what happens when the welfare state is gone.....

This is not so much as a blog, but merely a quick plug for this movie, one of the few 'must see' movies of the year (along with Cloud Atlas.) It won't be around at the cinema complex's for much longer, and it hasn't been a big box office hit - but it deserves to be.

It presents a nightmare image of the future, but of course, is a thinly disguised parody of the present. 1% of the people live in blissful conditions on 'Elysium', orbiting the earth, unreachable to all but the elite. Then there are the 99% living in the toxic, climate changed chaos of Earth. Terrible working conditions, a police state, awful poverty.

Health care is one of the big concerns of the movie. Though breakthroughs in technology have elongated the life and quality of the elite, these benefits are denied those who cannot afford them. I can't give too much away, but a hope for the future is if it becomes possible for all to equally have access to a decent healthcare system. That would be the greatest achievement of any revolution.

The film suffers from feeling the need to display the extreme violence of weaponry, (already explored more purposely in 'District 9' Neill Blomkamp's first directorial triumph) and an absurd plot twist when some mercenaries pointlessly wreak havoc on Elysium. But despite these weaknesses, the ideas and execution of the film make this one of the best films of 2013. It deserves a bigger audience, so get out there and check it out before it goes from our big screens 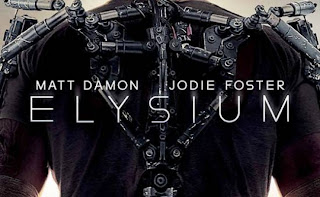