Good to see Morpeth celebrating their very own national hero - Emily Davison! To commemorate the 100th anniversary of her death in the suffragette cause, Sunderland University will be hosting a debate on the 18th Oct with Tamsin Omond - looking at the role of direct action and parliamentary representation. Book the date in you diary today!

Below is a snippet from the local BBC North East news coverage:

Suffragette Emily Wilding Davison was fatally injured when she ran out in front of King George V's horse during the Epsom Derby, on 4 June 1913.
She died four days later, and was buried in the family plot in Morpeth.
A series of "Emily Inspires" events is celebrating her life, and also highlighting the changing role of women over the past 100 years.
The town is being decked in suffragette colours, there have been workshops in local schools, the premiere of a new play about her, and a specially-written song. 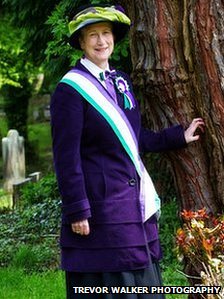 Penni Blythe-Jones says her costume brings history home
Morpeth Antiquarian Society is holding an exhibition in the town hall, featuring her christening gown, postcards and the suffragette scarf, or sash, she carried onto the Epsom racecourse, which is normally on display in the House of Commons.
On 15 June, there will be a suffragette picnic, a cycle ride and a parade.
The events, which will be attended by family members from as far afield as Australia, Canada, France and Norway, also aim to bring Davison's legacy up to date.
Penni Blythe-Jones, director of the Emily Inspires programme, said: "The suffragette picnic will also have groups of women in different uniforms to symbolise how far they have come in the last 100 years, to show what they can do now and couldn't then.
"Women having the vote is really a very recent thing, although limited suffrage was achieved in 1918, it wasn't universal until 1928.

The manner of the death of the woman, known locally as "the lawless lassie", caused controversy with some sections of the press referring to Davison as a lunatic.
She even received hate mail while she was lying in a coma.
However, it is now more widely accepted it was not an act of suicide but aimed at drawing publicity to the campaign, on the busiest day of the sporting calendar. 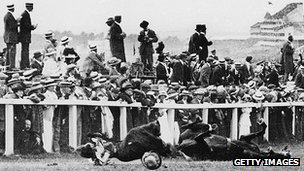 It is thought Emily Davison was attempting to pin a suffragette sash on the King's horse Amner
Maureen Howes, a local historian and author of a book about Davison, has also found evidence from family anecdotes that it was the Morpeth suffragettes who thought the Derby should be targeted and were spotted practising beforehand, by grabbing horses' bridles.
According to Ms Blythe-Jones, this change of view has had an impact on the town itself.
She said: "With a lot of things facts never get in the way of a good belief. Some people will always want to think things.
"However, I think what that's done has lifted a lid, relieved the secrecy.
"It's given the town pride back in her."
'Lone Ranger'
As a way of "bringing history home", Ms Blythe Jones has been wearing suffragette costume in the run-up to the centenary. 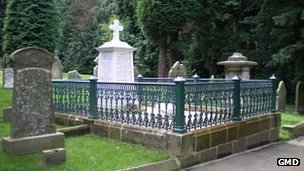 Emily Davison was buried in the family plot in the churchyard of St Mary the Virgin
"It's fascinating, you get into all sorts of conversations," she said.
"We talk about the importance of voting, it really brings it to life.
"Even now some people don't realise the connection, and it's so interesting to see their response when they discover she is local."
She added: "Emily wasn't a Lone Ranger woman, she was a very complex, rounded personality.
"It wasn't just about votes, she stood up for redistribution of wealth, equality in general.
"Even now, women are being disproportionately hit by the loss of jobs, by cuts to charities.
"It's all incredibly relevant, and Emily would be out there with everyone else."
Posted by Chris Howson at 08:17