This week saw the end of one of the best 'site specific' pieces of theatre ever created in the North of England. 'The Mill - City of Dreams' was performed by Freedom Studios, a mixture of professional actors and directors working alongside local people.

It is the story of Frank, who worked for in Drumond's Mill from 14 to retirement in 2002. Finally, after all the hundreds of staff are gradually made redundant, he wonders the mill with his set of keys, a caretaker with nothing left but his memories of the workers from around the world who were employed alongside him. Stories of the journeys of Italians, Pakistanis and Ukrainians are lovingly recreated.

In the present, there is a hilarious parody of Will Alsop's 'master plan' for the city of Bradford, as we are invited into the false utopia offered by 'luxury apartments' in the now empty mill.

As the audience wanders around the mill with Frank, and we see stunning sets created in the buildings atmospheric rooms (including the mills vast attic floor) it is impossible not to be moved and to feel the presence of those who have gone before you over the generations.

It was theatre at its best, but left us with many questions. What is the future for these Northern cities, populated by huge cathedrals to an industry that has completely disappeared? What will become of the generations of young people left over from these waves of migration? 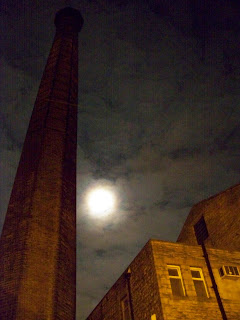 No easy answers in the 'city of dreams'. But the faith of the workers, Muslims and Christians was respected by this production. Perhaps it is suspected, that rather than in property or 'the market', it is in 'faith and humanity' that solutions may be found for this city's future.
Posted by Chris Howson at 11:33